Astronomers have detected the farthest galaxy group so far, three galaxies that have helped to alter the universe by resulting in a “sweeping cosmic makeover.”

The group of galaxies, known as EGS77, dates to roughly 680 million years into the birth of the universe, approximately 5 percent of its current age of 13.8 billion years. This collection is participating in a process known as reionization, which started when light from the first stars altered the nature of hydrogen, similar to a frozen lake melting in the spring, NASA describes.

“The young universe was filled with hydrogen atoms, which so attenuate ultraviolet light that they block our view of early galaxies,” said James Rhoads, who presented the findings at the 235th meeting of the American Astronomical Society in Honolulu, in a statement. “EGS77 is the first galaxy group caught in the act of clearing out this cosmic fog.”

This composite of archival Hubble Space Telescope visible and near-infrared images shows a part of the Extended Groth Strip, a well-studied area located between the constellations Ursa Major and Boötes. The three galaxies of the EGS77 galaxy group, shown in the green circles, lie at a redshift of 7.7, which means we’re seeing the galaxies as they were when the universe was just 680 million years old. (Credit: NASA, ESA and V. Tilvi (ASU))

The galaxies were confirmed to be 13 billion light-years away from Earth after the researchers compared their data with that from two other telescopes. A light-year, which measures distance in space, equals 6 trillion miles.

To discover this ancient galaxy group – which effectively burned off the “cosmic fog” by splitting the hydrogen into protons and electrons, allowing for light to travel throughout the universe – they looked for a section of space that had the exact wavelength of the ancient stars, known as Lyman-alpha emissions.

“Intense light from galaxies can ionize the surrounding hydrogen gas, forming bubbles that allow starlight to travel freely,” team member Vithal Tilvi added. “EGS77 has formed a large bubble that allows its light to travel to Earth without much attenuation. Eventually, bubbles like these grew around all galaxies and filled intergalactic space, reionizing the universe and clearing the way for light to travel across the cosmos.” 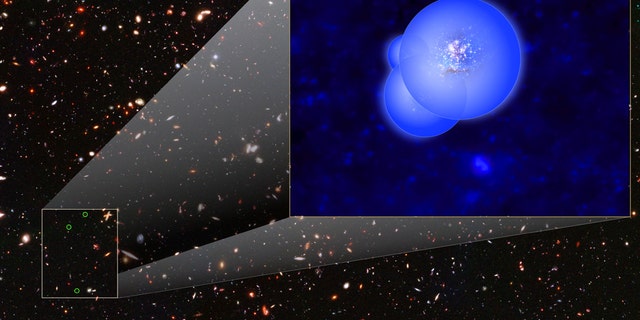 This illustration of the EGS77 galaxy group shows the galaxies surrounded by overlapping bubbles of ionized hydrogen. By transforming light-quenching hydrogen atoms to ionized gas, ultraviolet starlight is thought to have formed such bubbles throughout the early universe, gradually transitioning it from opaque to completely transparent. (Credit: NASA, ESA and V. Tilvi (ASU))

This light starts at a wavelength of 121.6 nanometers but it stretches out to near-infrared after traveling across the universe for billions of years, allowing for the researchers to detect it.

“While this is the first galaxy group identified as being responsible for cosmic reionization, future NASA missions will tell us much more,” said the study’s co-author Sangeeta Malhotra. “The upcoming James Webb Space Telescope (JWST) is sensitive to Lyman alpha emission from even fainter galaxies at these distances and may find more galaxies within EGS77.”

The research describing the discovery has been submitted to The Astrophysical Journal.

The JWST, the long-awaited successor to the Hubble Space Telescope, was finally assembled in August after two halves of the telescope were joined together in Redondo Beach, Calif.

The next steps for the telescope include engineers deploying the five-layer sunshield, which NASA said is “designed to keep Webb’s mirrors and scientific instruments cold by blocking infrared light from the Earth, Moon and Sun.” The space agency added that the deployment of the sunshield “is critical to mission success.”